Jubilate’s Saturday lunchtime recital, entitled Voyage Européen, at Clifton Cathedral in Bristol took the audience on a tour of some of Europe’s great choral works.

The Cathedral Church of SS. Peter and Paul (Clifton Cathedral) is the Roman Catholic cathedral of Bristol. The grade II listed building was constructed in the early 1970s and is a breathtaking example of brutalist architecture, characterised by simple and exposed, raw concrete structures. The result is a wonderful acoustic that makes it the perfect home for choral music. Immersive to sing in as it is to listen.

This was our second visit to Clifton and once again it did not disappoint. Conducted by Ian Higginson and expertly accompanied by Neil Fortin, our recital opened with the lively Cantate Domino by Italian baroque composer, Pitoni. The energetic anthem is always a great concert opener that immediately captures audience attention.

From Italy to Austria with the Mozart Ave Verum and then on to France where we gave the choir’s first ever performance of Poulenc’s triumphant 1941 motet, Salve Regina (“Hail Holy Queen”).

Then home to 20th century England, with the Missa Brevis – a short mass written especially for Jubilate by our very own musical director and composer Ian Higginson. The audience was then catapulted back to the 16th century with the Thomas Tallis classic If Ye Love Me, most recently heard at the wedding of The Duke and Duchess of Sussex.

Another new addition to the Jubilate repertoire followed with the Ave Maria by French renaissance composer Josquin des Prez followed by a visit to Germany and Bach’s Jesu Lead Thy Footsteps Ever. We then settled in France with the Duruflé Ubi Caritas, Saint Saens Panis Angelicus and closed with an old Jubilate favourite, Cantique de Jean Racine by Gabriel Fauré.

It’s fair to say the whole choir enjoyed yet another successful lunchtime recital at this magnificent venue and we look forward to returning to Clifton Cathedral some time in the future.

The poster for last year’s Joy of Christmas:

The next Joy of Christmas will be on Saturday 5th December 2020, at St Matthews Church, 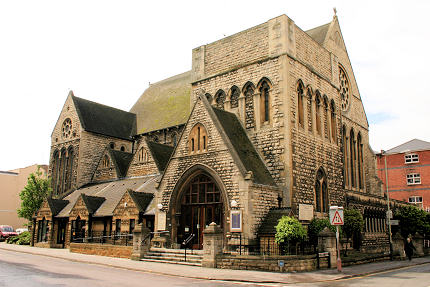 on the corner of Clarence St, and St George’s Place, Cheltenham GL50 3PL .

Hosted by Jubilate, with the English Concertante Orchestra and guest performances from other choirs. Festive refreshments will be offered.

“CUT!” the director called out just before we were about to start singing the first verse of “Dear Lord and Father of Mankind” and the choir let out a collective breath as a motorbike could be heard noisily passing by.

This was one of the hazards of filming a clip for BBC1’s One Show one July afternoon in the Rose Garden in the grounds of Highnam Court, others including pages of music blown by sudden breezes and the sun making intermittent appearances causing light sensitive glasses to darken (a nightmare for continuity!).

Jubilate Chamber Choir was delighted to have been asked to perform Hubert Parry’s well-known hymn for a piece on Parry and his music for the One Show. The film recording formed part of a busy 10th anniversary year for Jubilate in 2011, including performances at Christ Church Cathedral in Oxford and St Alphege’s Church in Greenwich, London, as well as closer to home in Broadway and Cheltenham. The highlight of the year was the choir’s August tour of Paris where we sang Mass at Notre Dame and performed two concerts, one at the American Church and the other at La Madeleine, both in the centre of the city.

And as for our TV filming experience? “It was challenging performing to the best of our ability in an outdoor setting, but we thoroughly enjoyed it” said Ian Higginson, Jubilate’s music director, “and our glimpse behind the scenes made us smile more than once. For instance, even TV directors say “ACTION” and Gyles Brandreth is the same in real life as he is on the TV!”